President Donald Trump speaks during a news conference Thursday, July 23, 2020, at the White House in Washington.

(The Center Square) – In response to the Tennessee Valley Authority’s plan to outsource 20 percent of its tech jobs to foreign workers, President Donald Trump has fired TVA’s board chairman and called for TVA to hire a new CEO.

Trump told reporters at the White House on Monday he fired TVA chairman James “Skip” Thompson, along with another board member, The Associated Press reported.

“Let this serve as a warning to any federally appointed board: If you betray American workers, you will hear two words: ‘You’re fired,’ ” Trump said.

As the U.S. economy tanked amid COVID-19 shutdowns earlier this year, TVA announced it planned to outsource 20 percent of its technology jobs to companies in foreign countries. According to the White House, the action could cause more than 200 American tech workers to lose their jobs to foreign workers.

“The President did the right thing by holding TVA executive leadership accountable for being careless with American livelihoods,” Congressman Tim Burchett said in a statement to The Center Square. “This most recent controversy at TVA shows there needs to be greater transparency and accountability within the organization.”

Trump also said the TVA board should hire a new CEO, who should be paid no more than $500,000 a year. TVA President and CEO Jeff Lyash is “ridiculously overpaid,” Trump said.

Lyash is considered the highest-paid federal executive in the U.S. and earned more than $8 million in his first six months at TVA last year, the Washington Times reported. Lyash’s base salary of $920,000 is more than twice the president’s salary of $400,000.

“I agree with President Donald Trump that we should prioritize the hiring of American workers,” Congressman Chuck Fleischmann said in a statement to The Center Square. “It is important that TVA continue to maintain good and solid leadership when they are responsible for a critical component of our nation’s infrastructure, serving millions of Americans in Tennessee and other states, meeting our energy needs.”

TVA released a statement on Twitter Monday afternoon in response to the president’s action.

“All TVA employees are U.S. based citizens. All jobs related to TVA’s Information Technology department must be performed in the U.S. by individuals who may legally work in this country,,” the statement read. “As a federal corporation, TVA’s Board members serve at the pleasure of the President. The Board’s by-laws allow for the Board to continue its oversight function with the loss of one or more of its members.” 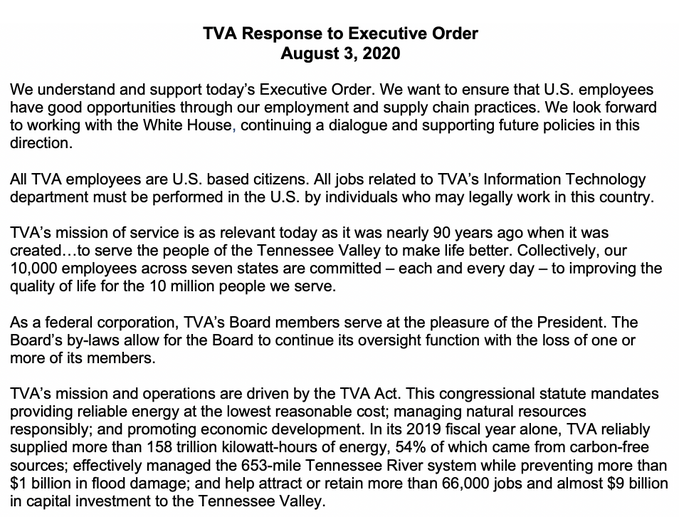