The top Chinese smartphone making brand Xiaomi, spreading its grounds in the Indian smartphone Market the company is gearing up to launch its Redmi Note 4 smartphone around the country in January. 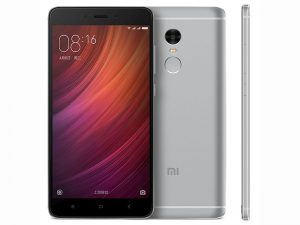 The technology news reporter, MakTechBlog revealed in its report that the smartphone will be soon available in India, however, it also stated that the release date is not confirmed but it will launch sometime in January. It will be priced around Rs. 11,999, the blog noted.

It was earlier touted that the China variant of Xiaomi Redmi Note 4 is powered by Helio X20 SoC, while, the smartphone will be equipped with Snapdragon 625 SoC when it will launch in India. The reports cleared the same and stated that in India, the handset will be powered by a 2GHz Octa Core Qualcomm Snapdragon 625 Processor bundled with an Adreno 506 GPU. The smartphone runs on Android 6.0 Marshmallow (out-of-the-box).

The handset is available in 2GB, 3GB or 4GB RAM options Gold, Grey, and Silver colours in its home country but it is still unclear which of the variants will be unveiled in India. Moreover, it is also available in 16Gb and 32GB storage variant which are capable of supporting a microSD card up to 128GB.

Besides, the Redmi Note 4 is fronted with a 5.5 inch Full HD (1920×1080 pixels) IPS 2.5D curved Display with a pixel density of 403ppi; and a 5-megapixel of user-facing secondary camera. While it is backed with a 13-megapixel rear and primary camera with Dual-tone LED flash and Phase Detection AutoFocus. It is fueled with a gigantic 4,100 mAh battery.

The phone also boasts a fingerprint scanner on its back, and comes with an infrared sensor, apart from the other standard connectivity options like GPRS/ EDGE, 3G, 4G with VoLTE, Bluetooth, GPS, Micro-USB, and Glonass.

In addition to it, sources suggested that the recently launched Xiaomi Redmi 3S, Redmi 3S Prime will be available alongside other smartphones during Flipkart Big Shopping Days sale from today.