A virtual meeting of G-20 Agriculture and Water Ministers held today was attended by G-20 Member countries and special invitees. Minister of Jal Shakti Shri Gajendra Singh Shekhawat and Minister of State (MoS) for Agriculture and Farmer’s Welfare Shri Parshottam Rupala attended the meeting. In his opening remarks Shri Shekhawat thanked Kingdom of Saudi Arabia for the current Presidency of G-20 and complemented Saudi Arabia for its exemplary leadership during this Covid-19 pandemic for successfully facilitating the dialogue among the member countries through virtual meetings. The Minister stated that technology plays a critical role in the prevailing pandemic situation and applauded India’s IT expertise which India shares with the whole world. He also praised Japan for its leadership during previous presidency and extended best wishes to Italy for the next presidency. 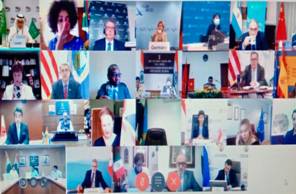 During the Saudi presidency G-20 discussion held on sustainable and resilient water management, thereby optimizing the impacts of water related activities in G-20 forum through collaboration, knowledge sharing on different aspects of water.  In the last 10 months, number of meetings have been held among member countries to bring synergy and prepare roadmap for holistic water management. As a part of this dialogue, a 3-days meeting was organized by Saudi presidency during 10-12 September, 2020. Deputy Ministers, in-charge of water and agriculture, deliberated issues related to water and agriculture on 10thand 11thSeptember, 2020 and the Ministers of Agriculture and Water met on 12th September, 2020 to share their views.

TheMinister of Jal Shakti reiterated that India believes in the concept of ‘Universal brotherhood & Collective wisdom’ and will continue to play an active role in collaborative groups such as G-20. The Minister assured the Forum of India’s commitment to work tirelessly to contribute to the objectives, goals and targets set by G-20.  The Minister appreciated G-20 and Saudi Presidency for emphasis given on water by initiating a separate dialogue on various aspects of water resources management.

Stating that agriculture is a high priority sector for Government of India, MoS, Agriculture and Farmer’s Welfare, Shri Rupala mentioned about the policy measures taken by the government to ensure food security. He also reiterated India’s resolve to work together in collaboration to enhance the productivity, sustainable use of natural resources, development of agriculture value chain and promotion of trade for the benefit of people. He also informed about successful protocols developed by India to use drones for spraying of pesticides for timely control of the dessert locust, thereby appealing G-20 member countries to work in tandem to come up with an action plan for trans-boundary pest and diseases to safeguard agricultural crops. It was also emphasized about the progressive reforms and measures taken up by government of India to open up new agricultural market options, development of agricultural infrastructure, food processing enterprises, value chains and logistics for fisheries and animal husbandry, medicinal and herbal plants. Shri Rupala also appealed G-20 member countries to share knowledge and best practices to reduce the ill-effects of climate change that could affect agriculture and livelihoods of farmers.

The Minister of Jal Shakti highlighted the leadership and initiatives of Prime Minister of India, Shri Narendra Modi to address India’s water and sanitation issues.He informed that Government of India has takenseveral initiatives to improve the quality of life of its 1.37 billion people by implementing a 51 Billion USDollar programme, ‘Jal Jeevan Mission’ to provide household tap connections to 190 million rural homes, thereby ensuring drinking water security. Mentioning about Open Defecation Free India,it was informed about the efforts to sustain the gains of Swachh Bharat Mission, with more focus on solid and liquid waste management and grey water treatment and reuse.

India will be part of G-20 Troika from December, 2020 and host G-20 Presidency from December, 2021 to November, 2022 when India celebratesits 75 years of Independence, which will be anexcellent opportunity forG-20 member countries to explore the cultural heritage and various aspects of the world’s largest democracy and ancient civilization.

Technology can be an enabler for India to position itself as a global leader and build better international collaborations: Prof. K VijayRaghavan, PSA