(The Center Square) – President Donald Trump’s actions meet statutory descriptions of a “subversive person” and “inciting insurrection,” according to the Florida Senate’s leading Democrat, who wants the president investigated for allegedly committing at least two felonies under state law for his role in Wednesday’s U.S. Capitol riot.

“The assault on both houses of Congress as well as the Vice President violated not only the laws of our nation but Florida’s statutes as well,” Senate Democratic Leader Gary Farmer, D-Fort Lauderdale, wrote in a two-page letter to Florida Attorney General Ashley Moody.

Farmer requested Moody to investigate whether Trump committed crimes against the state when he urged supporters to disrupt the procedural confirmation of President-elect Joe Biden’s Electoral College victory.

“Donald Trump’s aid to and advocacy for the efforts to disrupt and prevent the Vice President and Congress from fulfilling their constitutional mandate established a crisis that put our nation’s constitutional form of government at risk. As such, Donald Trump fits the definition of a ‘subversive person’ as established by 876.22 Florida Statutes,” Farmer wrote.

Under Subsection 5 of Florida statute 876.22, a “subversive person means any person who commits, attempts to commit, or aids in the commission, or advocates, abets, advises, or teaches by any means any person to commit, attempt to commit, or aid in the commission of any act intended to overthrow, destroy, or to assist in the overthrow or destruction of the constitutional form of the Government of the United States, or of this state, or any political subdivision of either of them, by revolution, force, violence, or other unlawful means; or who is a member of a subversive organization or a foreign subversive organization.”

“Additionally,” Farmer wrote, “as both Donald Trump and other members of the seditious band are residents of the state of Florida, Donald Trump’s actions fit the definition of ‘inciting insurrection’ as established by 876.36 Florida Statutes.”

A second-degree felony conviction carries a maximum 15-year prison term and a $10,000 fine.

Farmer acknowledged Trump likely is shielded from criminal liability while in office, but he told Moody as ex-president, he could be open to being charged after Jan. 20.

“As the Attorney General of our state it is your sworn duty to hold Florida’s criminals accountable. This duty still exists in regard to the criminal acts perpetrated by Donald Trump,” Farmer wrote. “Given the severity of Donald Trump’s criminal actions, and the grave threat that they posed to the existence of our nation’s government and its adherence to the Constitution, you are compelled both by your oath and commitment to the people of Florida to fully investigate the potential criminal actions laid out above.”

Moody, who filed a motion in support of Texas’ rejected election lawsuit challenging Biden’s win and filed a failed amicus brief urging the U.S. Supreme Court to hear the dispute, has not responded.

January-to-September state tax revenues in Minnesota were 4.2% below 2019 numbers

January-to-September state tax revenues in Michigan were 11.6% below 2019 numbers

January-to-September state tax revenues in Wisconsin were 8.2% below 2019 numbers 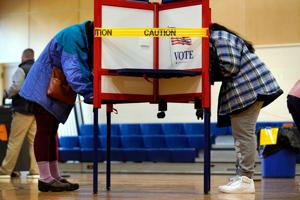